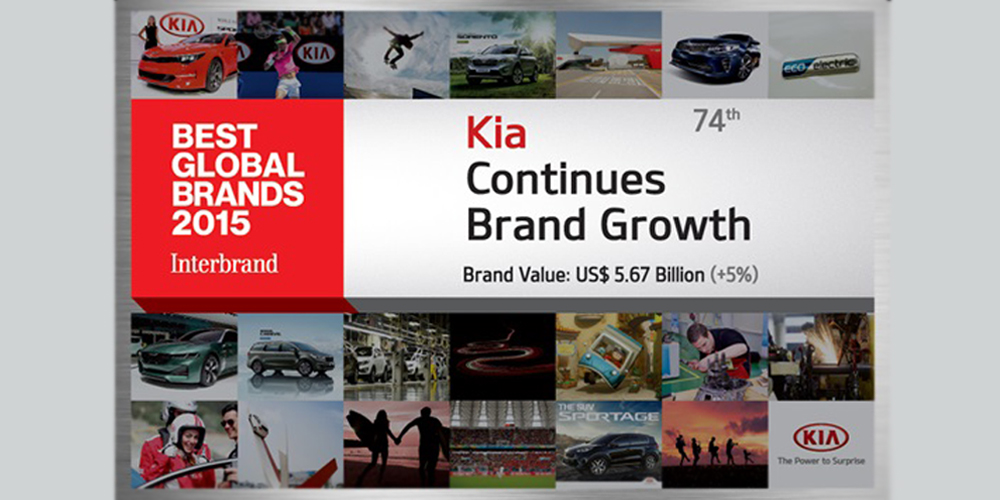 Kia Motors has seen the value of its brand grow by 5% over the past year, further consolidating its position within the Top 100 globally.

The latest global brand review conducted by international experts, Interbrand, shows that Kia’s brand value has risen to an estimated value of US$5.7 billion in 12 months.

Since declaring design management a core driver of the company's future growth and the hiring of President & Chief Design Officer Peter Schreyer in 2007, Kia Motors Corporation's brand value has skyrocketed by an outstanding 530% since 2007, making it one of the best performing automotive companies on the chart.

Kia first entered Interbrand's annual 100 'Best Global Brands' rankings in 2012, coming in at 87th place with a brand value of US$4.1 billion and in its fourth consecutive appearance on the list it is now sitting in 74th position.

The performance should be taken as an indication of the inherent strength of the brand, says Todd McDonald, General Manager of Kia Motors New Zealand, who takes a keen interest in brand building.

“Kia Motors has invested heavily in a number of areas to build its brand, from hiring Peter Schreyer to oversee design, to the development of new technologies that improve the reliability, quality, economy, and performance of our cars.

“Kia also takes part in a number of high-profile sponsorships, including the 2015 FIFA Under-20 World Cup tournament hosted in New Zealand a few months ago, which was a big success for the company internationally, as well as ourselves locally. We also have the Australian Open that takes place every January.

Interbrand agrees with Mr McDonald’s remarks, adding that Kia’s remarkable growth is down to its dedication towards “excellent design, high quality and innovative brand management in the global markets”.

The result of the Interbrand survey comes on the back of a number of other accolades earned by Kia this year, including being named the number one mass market brand in J.D. Power’s Initial Quality Study (IQS).