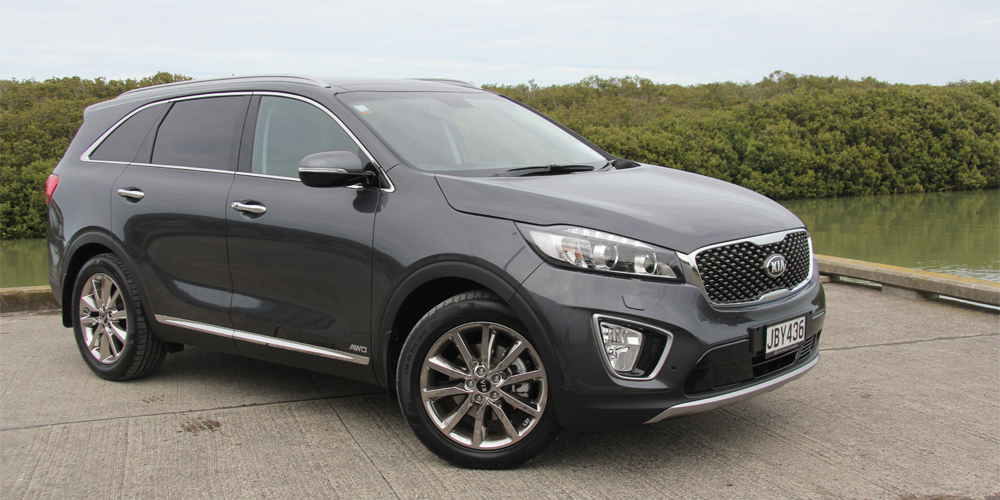 Bigger, more sophisticated and boasting greater levels of luxury and technology, the highly-anticipated 2015 Kia Sorento has arrived in New Zealand.

And for the first time in more than a decade, the Kia Sorento can now be experienced with a smooth and powerful V6 petrol engine, in addition to the 2.4-litre petrol and 2.2-litre diesel models.

“Traditionally, large SUVs have been powered by diesel engines and the Sorento was no different, but we have identified a market for a V6 engine and Kia has responded by introducing the 3.3-litre model with luxury Limited specification at a very competitive price to satisfy that demand,” says Todd McDonald General Manager of Kia Motors New Zealand.

Anticipation for the new Sorento range ahead of its New Zealand introduction has been extraordinarily high.

Mr McDonald says, “There has been unprecedented interest in the new Sorento, to the point where we had already pre-sold more than 100 vehicles before the launch. It’s such a good-looking vehicle, drawing second glances when it drives past, and is incredibly sophisticated on the road.”

All new from the ground up, the third generation Sorento delivers a more premium look and feel, with a smoother, swept-back style that ensures the new model has a bolder onroad presence.

The distinctive styling takes its cues from the Kia Cross GT concept vehicle, featuring an upright and more prominent ‘tiger nose’ grille between the long, wrap-around headlights. It has also taken the lower roofline, higher beltline and swept-back shape from the Cross GT, giving the newcomer a more dramatic and muscular stance.

The sleeker appearance of the new Sorento is enhanced by its increased length (up 95mm to 4,780mm), reduced height (down 15mm to 1,685mm) and extra width (up 5mm to 1,890mm). It’s not all about good looks though, with the Sorento being among the most efficient SUV shapes on the road boasting a Cd (co-efficient of drag) of just 0.33, down from the already impressive 0.34 of the outgoing model and lower than most of its competitors.

The increased dimensions as a result of the newly developed chassis with a longer wheelbase of 2780mm (up 80mm) translate into more space for the occupants inside and their luggage.

All New Zealand Sorento models have a third row of seats, providing generous accommodation for up to seven people. More legroom and headroom is available for those in the rear, with access to the third row greatly improved through new sliding mechanisms on the outward second row seats. The second row seats now also split and fold 40/20/40 for improved versatility, cargo space has increased by 17.5%, and the redesigned, compact rear bumper makes loading easier.

New Sorento has a smart, hands-free power tailgate (on Limited and Premium variants) that activates automatically when the driver is within 50-100cm of the rear for three seconds or more.

The wrap-around door design, which sees the thickness of the door sill significantly reduced and the lower part of the door extended downwards to the bottom of the sill, makes for easier ingress and egress.

In addition to being more spacious, the interior of the new Sorento is more luxurious thanks to higher quality materials and soft-feel surfaces. Leather is now standard on all but the two LX models, which are by no means lacking in luxury themselves.

“We’ve increased the specification on all models and if you look at the new EX, the standard equipment is much like the previous Sorento R Limited, and the entry-level LX is the equivalent to a mid-range model on some of our competitors,” adds Mr McDonald.

Satellite navigation, including a 3-year free map update, reversing camera, front and rear parking sensors, tyre pressure monitor and dual-zone automatic climate control are all standard across the Sorento range. LED daytime running lights are fitted to all models, along with 17” alloys on the LX models, 19” two-tone alloys on the EX, with the Limited and Premium variants benefitting from 19” chrome finish alloys.

There are distinctive design elements throughout the new Sorento, such as the centre-console, which incorporates Kia's latest HMI (human-machine interface) technologies.

A key focus for the Kia engineering team was achieving improvements in ride comfort, high-speed stability and handling response to match the significant enhancements in interior quality and NVH. Detailed changes to the fully-independent suspension system, together with the longer wheelbase deliver a more compliant ride and a more progressive response to bumps in the road.

A new electric motor-driven power steering system is mounted directly onto the steering rack, rather than the steering column to provide greater steering feel and quicker response, ensuring that new Sorento is among the more agile vehicles in its segment.

With three engine options available including the existing the 126kW 2.4-litre petrol unit, a revised 147kW 2.2-litre R-series diesel and the new 199kW 3.3-litre V6 petrol, all three engines are matched to a six-speed, sequential shift automatic transmission. With the exception of the V6, all models are equipped with AWD that now benefits from Advanced Traction Cornering Control (ATCC), enhancing stability when the vehicle is driven on challenging roads.

The new 2015 Kia Sorento is both stronger and safer than before, with more than 53% of the bodyshell comprising Advanced High Strength Steel. All Sorento models sold in New Zealand are manufactured to European specifications and have a 5-Star Euro NCPA Safety Rating.