Behind the scenes on the 2014 Sportage TV ad shoot

How do you shoot a new Sportage TV commercial all about the joys of escaping for a sneaky swim in the ocean at the onset of winter?

With tenacity, some bravery on the side of our swimmer, and a little camera trickery!

The shoot for the 2014 Sportage TVC, created by WORK Communications and shot by Blacksand productions involved four New Zealand locations over three days.

The stunning Awhitu Peninsula, south of Auckland set the scene for aerial driving shots using the very clever Octo Chopper - a mini drone version of the real thing. We also used a heavy-weight vehicle with a crane arm to get up close to the Sportage while driving along closed roads. 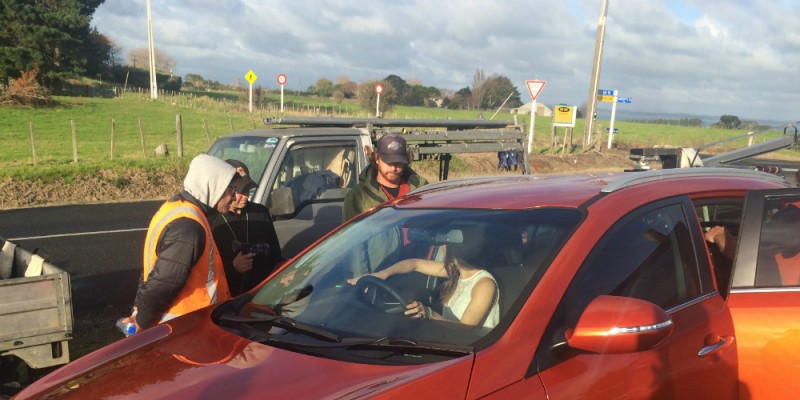 Day two involved the precise art of dripping hair in the office scene and some magical underwater swimming shots in the comfort and controlled environment of an indoor dive pool.

No such comfort on day three! Windy cold conditions at Long Bay saw all the 8 person crew in wet suits and our “sneaky swimmer”, Sophie Baragwanath braving the water in a swim suit!

Art Director Marco Ermerins said that despite the challenges, the three days were a lot of fun and praised  the fantastic  attitude of cast and crew. “It’s not often you get to film underwater for a car commercial!”

Tags: Sportage TV Behind the scenes

There is currently a worldwide shortage of the key electronic components required in many parts of a new vehicle. Without these components (called “semi-conductors”) the assembly of a new vehicle can be delayed, or in some cases can be impossible. Kia NZ is working closely with Kia Corporation to optimise NZ Kia production however delays are currently being experienced for NZ Kia customers.

Depending on the model and specification, delays can range from six weeks to six months plus. Your Kia dealer can advise you of the expected lead time for your specific vehicle. If you would like to contact us please click here. We would like to thank all of our customers for their support and patience during this time.