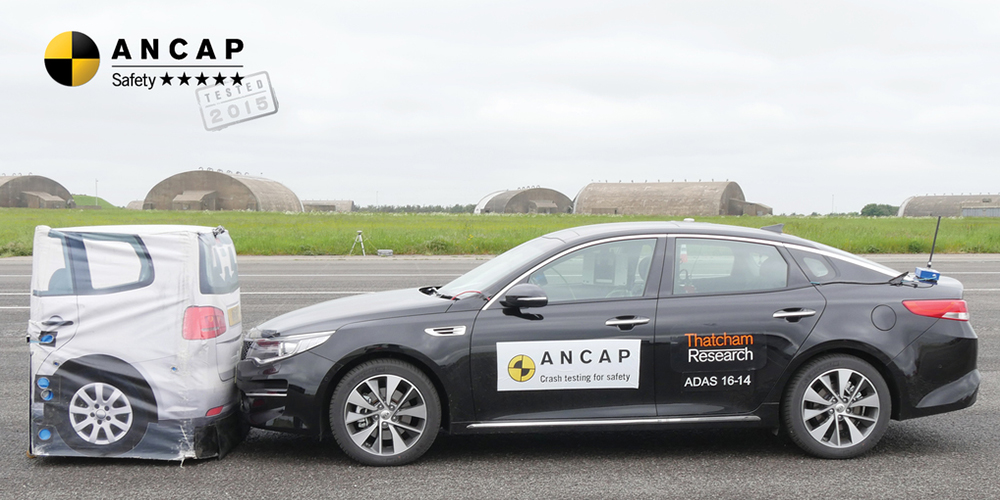 A continued emphasis by Kia Motors on vehicle safety has resulted in the sleek Kia Optima gaining a 5-star ANCAP safety rating for the New Zealand and Australian markets, and applies to all Optima models sold since the new generation was launched in March 2016.

“It is becoming more difficult to achieve a 5-star rating in these tests, and the Optima’s result is further demonstration of the long-term commitment to safer vehicles being developed by Kia,” says Todd McDonald, General Manager of Kia Motors New Zealand.

The Optima performed very well in the crash test procedures, which have progressively become more stringent over the years. It did particularly well in the side impact crash test where it gained maximum points across the board, and also scored close to maximum for the frontal and offset crash tests.

The offset test is important because it represents a large proportion of frontal crashes that take place. The ANCAP team remarked how the Optima’s passenger compartment held its shape well in the frontal offset test, with pedal and steering wheel displacements well controlled. The driver and passenger contact with the airbags was stable and all doors remained closed during the crash.

The 2016 Optima is stronger than its predecessor thanks to more extensive use of advanced high strength steel that makes up more than 50% of the body, improving road manners and crash safety.

Kia has streamlined the Optima range in New Zealand to two models, each targeted to a precise buyer bracket; a feature packed EX for business customers and a luxury Limited for private owners.

This move has enabled Kia to offer a range of advanced safety technologies as standard in both models. The EX comes with Advanced Smart Cruise Control (ASCC), which automatically adjusts speed to maintain a safe distance from vehicles in front; Lane Departure Warning System (LDWS) alerts the driver if the car strays outside its lane; High Beam Assist (HBA) automatically adjusts headlamp range according to other vehicles and road conditions; Forward Collision Warning System (FCWS) to help keep the Optima at a safe distance from the vehicle in front; and Autonomous Emergency Braking (AEB) detects a slowing vehicle in front and automatically applies the brakes to avoid a collision.

Both Kia Optima models are powered by a more refined ‘Theta’ 2.4-litre GDI engine that is perfectly matched to the six-speed, sequential shift automatic transmission.