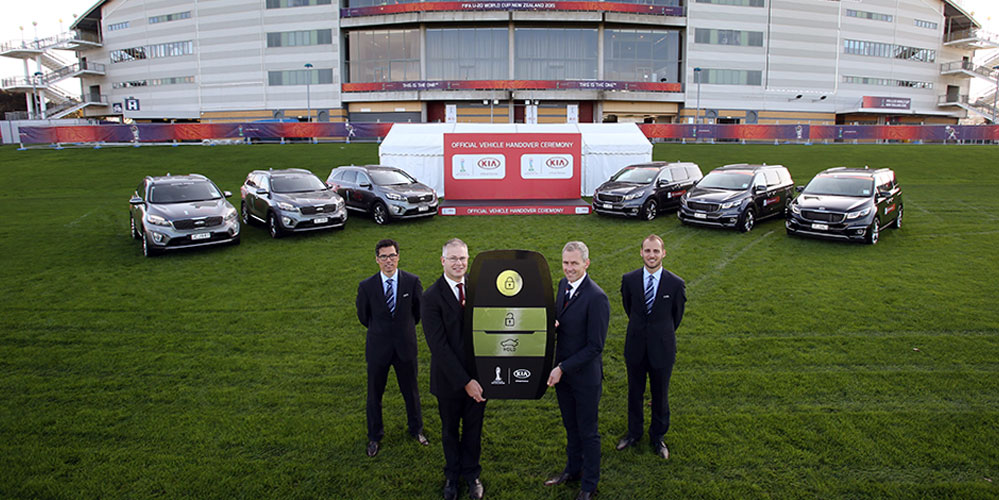 Kia Motors, Official Partner to FIFA, officially handed over 112 vehicles to support the transportation requirements of the FIFA U-20 World Cup New Zealand.

Kia Vehicles, including the all new 2015 Sorento and all new 2015 Carnival, Sportage, and Cerato Hatch and Sedan, will support the transportation of LOC and FIFA officials and delegates from all over the world.

As the ‘Official Automotive Partner of FIFA’ the world-class vehicles will be used from now through to the completion of the games on 20 June.

“We’re delighted to be providing a safe, reliable and award winning fleet of vehicles to FIFA,” said McDonald. “With these games happening here in our backyard, we’re also excited to be partnering with FIFA and bringing world-class football to our shores

All of the volunteers driving the vehicles handed over today have been shown by our dealerships how to setup the car to their preferences.  They were chosen to move both people and materials to support the efforts of FIFA and the Local Organizing Committee.

Dave Beeche added: ”We have been working closely with our partners at Kia Motors for several months having already used their Kia Soul vehicles for marketing purposes since the end of last year. It is fantastic that we can now extend this partnership and we remain hugely grateful for the support of the local Kia Motors team.”

In the lead up to kick off, Kia launched a key programme that invites Kiwi football fans aged between 8 and 12 years of age to be a game-day Kia Mascot Mate and run out on-field with Wooliam™. Today we’re also pleased to announce the child who will be running out on the field with Wooliam at the Final on 20 June.  After a promotion which engaged soccer Mums and Dads across the country we’re pleased to announce Jack Glassenbury from Christchurch.

“We’d like to thank Kia for the crucial role they play in providing the best possible vehicles to transport our people in comfort, style and safety. Kia is vital to the operational success of the FIFA U-20 World Cup New Zealand 2015. This handover ceremony is an important milestone on the lead up to the games, it signals that the LOC, FIFA, Kia and the nation are now up to speed and ready to move the event forward,” said  Mr Beeche.