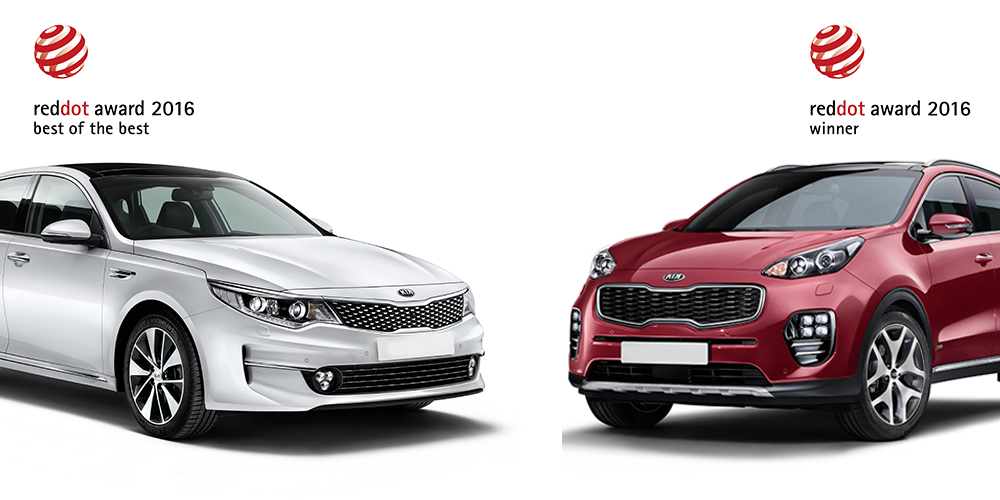 The recently launched Kia Sportage SUV and Kia Optima sedan were both awarded Red Dots for Product Design, repeating the success of the previous generation of these models.

In addition, the independent judging panel honoured the Kia Optima with a ‘Best of the Best’ award, the competition’s highest distinction for which only the most ground-breaking designs in a category are eligible – an award it had also won previously.

Kia has now won a total of 15 Red Dot Awards since 2009 when the Soul SUV crossover made the breakthrough for the company in this competition.

The Red Dot Design Award, has become one of the world’s leading design competitions since its inception in 1955 by the Design Centre of North Rhine-Westphalia in Germany. Entries are divided into the three disciplines: Product Design, Communication Design and Design Concept. This year companies from 57 countries registered 5,214 products and innovations.

Peter Schreyer, President and Chief Designer of Kia Motors Corporation and Hyundai Motor Group says: “Our international design team has every cause to be exceptionally proud of these most recent awards.

“The first Red Dot Awards for the Kia Sportage and the Kia Optima were already great successes. It is a very special achievement to further develop a first-rate, prize-winning model so that the new design also convinces the expert jury of this globally respected and prestigious design competition.

“The two award winners are important models for our brand. The Sportage has been the brand’s bestseller in Europe for many years.

“The Kia Optima, which is one of the strongest selling Kia models worldwide, also embodies the development of the brand in a very special way; the third generation, which arrived on the global stage in 2010, acted as the catalyst for the design-led transformation of Kia’s product range in the following years.

“Both the new 2016 Sportage and the 2016 Kia Optima stand out very strongly from their rivals in their respective categories on account of the clarity, distinction and sporty elegance of their exterior design. Both cars also feature a completely redesigned, premium-standard interior with modern, horizontally aligned and very ‘clean-looking’ design.”

The new Kia Sportage and Kia Optima have just gone on sale in New Zealand, where their distinctive designs have already caught the attention of buyers.

“Design is critical for the success of any vehicle and our customers rate Kia styling very highly in their purchase decision,” says Todd McDonald, General Manager of Kia Motors New Zealand.

“For the new Sportage and Optima to win consecutive Red Dot Awards underlines the strength of the design credentials at Kia Motors.”

These are the second major international design awards for the Sportage and Optima in the space of just a few weeks. The 2016 Kia Sportage was honoured with an iF Product Design Award in Hanover, Germany recently and the 2016 Kia Optima was one of three Kia products to be acknowledged in the world’s oldest design competition, GOOD DESIGN, in Chicago.