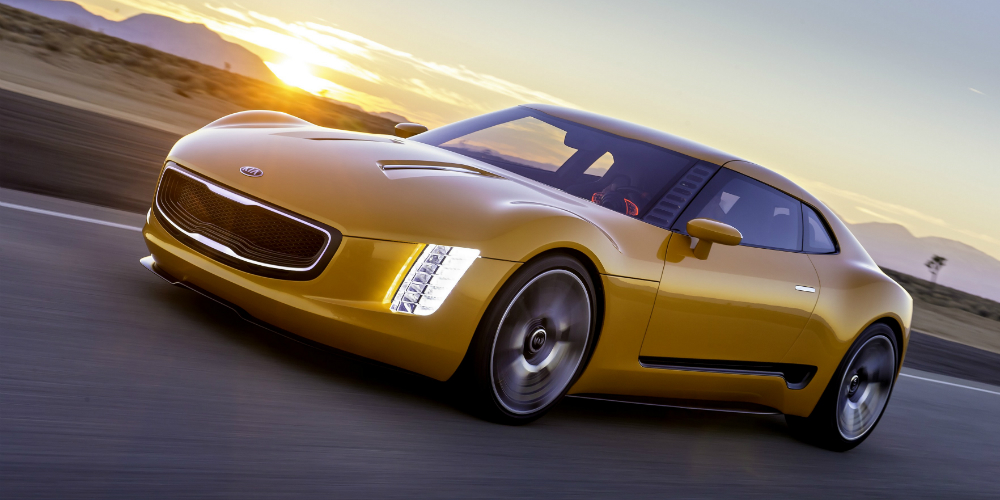 The GT4 Stinger concept - designed to be noticed

It’s designed to be noticed and that is exactly the reaction the powerful Kia GT4 Stinger concept vehicle received when it was unveiled at the 2014 Detroit Motor Show.

It’s designed to be noticed and that is exactly the reaction the powerful Kia GT4 Stinger concept vehicle received when it was unveiled at the 2014 Detroit Motor Show.

Harking back to the glory days of purebred sports cars, the GT4 Stinger has the grunt to go with its racy looks, thanks to a 235kW (315hp) race-bred engine that relays its power through the rear wheels.

Developed by Kia’s California design team, which also penned the exciting Soul Track’ster concept a couple of years ago, the GT4 Stinger underlines the sporting credentials of the Kia brand.

“Driving enjoyment was the number one priority in designing the GT4 Stinger,” says Tom Kearns, chief designer, Kia Design Center America . “It’s a 2+2 sports car that can turn heads as a daily driver while also being right at home on the track. It’s about purity, simplicity and timelessness. The GT4 Stinger is a throwback to days when driving a car was a visceral experience that wasn’t muted by electronic gimmickry.”

The concept shuns the luxury trappings of a traditional Grand Touring car and embraces the elemental experience of truly engaging with the vehicle, with Mr Kearns noting:  “If anyone were to ask if Kia has the credibility to build a car like the GT4 Stinger, I would simply point out that Kia races – and wins – against some of the world’s most legendary performance brands.”

The racing connection can be seen under the long, sleek bonnet of the Kia GT4 Stinger, in the form of a tuned version of Kia’s proven 2.0-litre turbocharged direct injected (T-GDI) four-cylinder petrol engine, which powers the Kia Optima race cars that finished second in the Pirelli World Challenge in the US last year.

“Our Optima race cars use the same engine and can produce more than 400 horsepower,” adds Mr Kearns. “So why not infuse our concept with the kind of power that will make people take notice?”

Underpinning the GT4 Stinger’s sculpted ‘Ignition Yellow’ body is a custom chassis with independent double wishbone suspension. With a shorter 2618mm wheelbase and 4310mm overall length than a Cerato sedan, a width greater than a Cadenza large sedan, and a swooping roofline nearly 229mm lower than a Rio, the GT4 Stinger cuts a menacing figure. It tips the scales at a scant 1306kg and weight distribution is spread nearly perfectly at 52:48. The GT4 Stinger also features a quick-ratio steering rack for direct feedback and uncompromised control.

“We gave the car a shrink-wrapped appearance,” says Mr Kearns. “It’s as if the body panels were formed around the chassis instead of merely welded to it.”

In silhouette, the GT4 Stinger is simple, yet powerful, with the latest iteration of the signature Kia grille low to the ground for maximum engine cooling and cold-air induction. The grille surround glows white and features a multi-layered, satin-black border, a theme found throughout the car. Flanking the grille on both sides are vertical LED headlamps, and front-brake cooling vents intricately moulded into the bumper provide a clean, smooth appearance.

The long bonnet melds into the massive glass area that Tom Kearns says makes the car appear as if it is wearing “wrap-around sunglasses”, before swooping to a fastback rear with powerful wheel-arch bulges over the rear wheels and large, twin exhausts set into the valance.

Inside, the Kia GT4 Stinger has an equally powerful presence, with moulded leather race-inspired buckets seats and instruments seat into a simple dash. In keeping with the track theme and taking inspiration from sports and competition cars of the past, interior door handles have been replaced by red-stitched pull straps and the carpet is replaced by rubber flooring. There’s not even a stereo, with Mr Kearns remarking “the audio system starts under the hood and the speakers are the exhaust pipes”.

Kia says that while there are no plans to put the concept into production, the company does have a history of building vehicle that bear a strong resemblance to concepts.

And when asked who the GT4 Stinger is intended for, Mr Kearns replies: “It’s a totally selfish design. The design team at the, Kia Design Center America is full of gear heads and enthusiasts and the GT4 Stinger is the perfect car for that kind of crowd.”