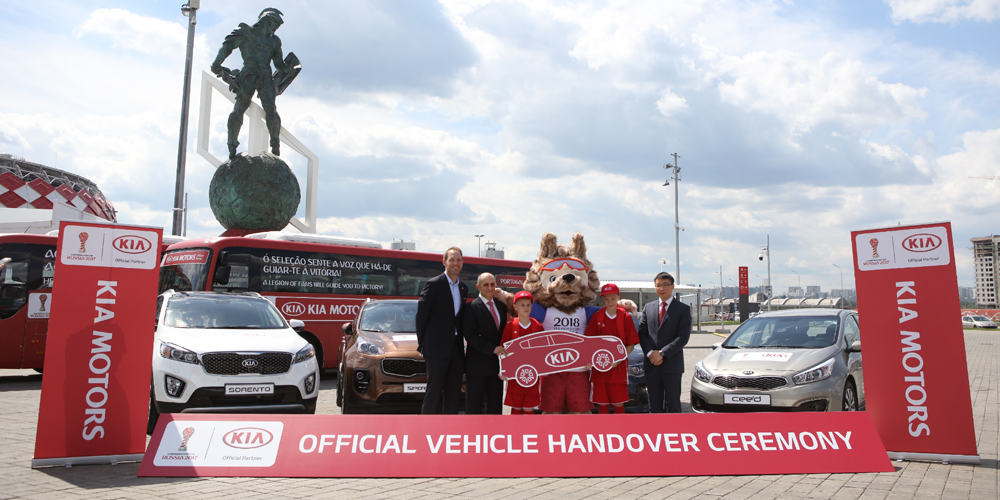 The FIFA Confederations Cup will start on the 17th of June, with eight teams vying for a place in the final, to be held in Saint Petersburg on July 2. The tournament is contested by the holders of each of the six regional championships (Australia, Cameroon, Chile, Mexico, New Zealand, Portugal), along with the FIFA World Cup holder (Germany) and the 2018 host nation (Russia).

Official automotive partner to FIFA, Kia Motors has supplied the 83-strong fleet of vehicles including Mohave, Sorento, Sportage and cee’d to transport national football teams, referees, officials and delegates during the international tournament. Kia will also provide 24-hour roadside support throughout the tournament.

Attending the handover ceremony, Jay Neuhaus, FIFA Head of Rights Delivery & Hospitality, said, “Kia Motors has been our official partner since 2007 and we are grateful for its support in supplying tournament vehicles for this year’s FIFA Confederations Cup in Russia. The fleet of vehicles will ensure the smooth operation of the event, enabling us to transport players, media and officials throughout the tournament. Both FIFA and Kia share a passion for football, and these cars will be used behind the scenes to deliver the excitement of ‘the beautiful game’ to fans around the globe.”

Alexander Moynov, Managing Director of Kia Motors Russia, commented, “As a prelude to the 2018 FIFA World Cup, the 2017 FIFA Confederations Cup is one of the most important international football tournaments this year, and is followed by millions of fans worldwide. We are excited to be involved in making the Confederations Cup a success, and we look forward to bringing people closer to the Kia brand through this major event.”

In the build-up to 2017 FIFA Confederations Cup, Kia will bring back its globally popular five-a-side amateur football tournament, ‘Kia Champ into the Arena’. Kia will host its very own ‘World Final’ in Russia on the 28th of June, with five-a-side teams selected from national contests taking place in eight countries around the world. 10 winning teams will travel to Sochi to play the World Final. The finalists will also be invited to watch one of the semi-finals of the 2017 FIFA Confederations Cup.

Kia’s involvement in the FIFA Confederations Cup 2017 also includes the company’s search for official match ball carriers. Sixteen children from all over the world will take part in the pre-match ceremony – a once in a lifetime opportunity for young football fans to hand over the match ball to the referee. Kia also held a ‘Lucky Drive’ competition, selecting two customers from 18 countries around the world to attend the opening match of the tournament. Kia Motors New Zealand’s winners, Jo and Peter from Auckland, test drove and purchased a new Rio – now they’re on their way to Saint Petersburg to watch the New Zealand team take on Russia in the opening match on the 17th of June.