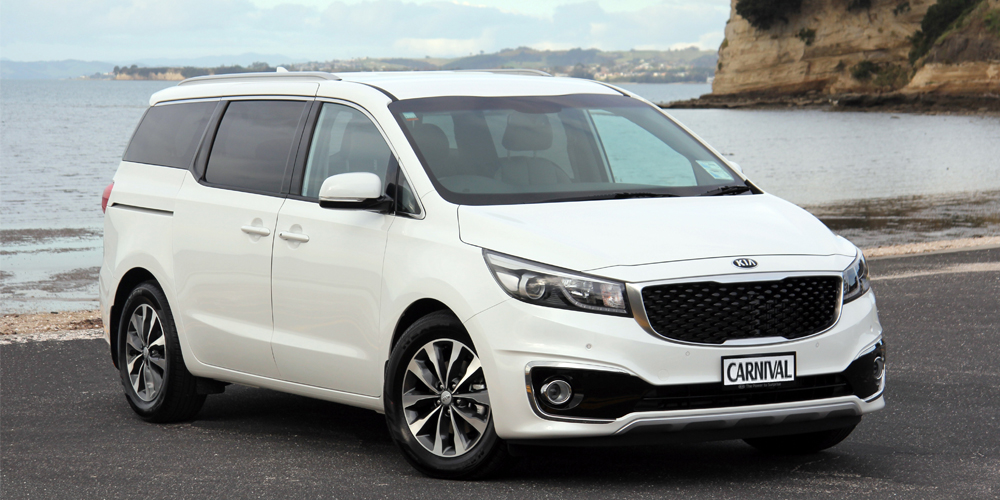 The all new third generation 2015 Kia Carnival, now on sale in New Zealand, marks a dynamic reinterpretation of the Multi-Purpose Vehicle or MPV.

Featuring a bold and distinctive crossover utility design, with a substantially improved interior, the new Carnival offers buyers both a greater use of space and range of safety technologies than ever before.

“This is a car that changes the landscape for traditional MPVs,” says Todd McDonald, General Manager of Kia Motors New Zealand.

“It’s not just an 8-seat vehicle to transport passengers and their luggage, the new Carnival is seriously good-looking and we believe it will attract buyers as much for its styling, as for its practicality.

He says Kia has made a significant leap in the design of the new Carnival, with the cabin recently selected by US-based Ward’s Automotive magazine as one of the world’s Ten Best Interiors.

The exterior resembles the recently introduced Kia Sorento SUV and is designed to appeal to style-conscious buyers of all age groups who enjoy an active lifestyle.

Kia’s Chief Design Officer, Peter Schreyer, says the designers were given a clear mandate to make the new Carnival more of a crossover than a people mover, saying they succeeded to the point where he “would love to drive” one.

They started from a completely clean sheet, creating the 2015 Carnival on an all new chassis with a longer wheelbase, which is stretched 40mm to 3,060mm (longest in its class) to provide improved legroom for occupants. While the height has decreased 55mm to 1,755mm, the floor has also been lowered, making little impact on headspace and improving entry into and exit from the vehicle. The overall length of the Carnival has reduced slightly, making it easier to park and manoeuvre.

As before, the 2015 Carnival has two large power-operated sliding doors, allowing excellent access into the middle and third row seats. Like the Sorento, the smart tailgate opens automatically on the Limited and Premium models when the driver approaches with the smart key in pocket or bag.

The seating and layout has been completely redesigned. Behind the front driver and passenger seats is a row of three individual seats, with the middle one able to be removed to allow walk-through to the rear when the doors are shut, or the backrest can fold to provide a table and additional drink holders. A unique feature of the second row seats is how they can be folded upright against the front seats, increasing the entry and exit space to the third row – among the best access of any MPV on the market. Three Isofix restraints offer premium safety levels for small children instead of the usual two, and all seats now have 3-point safety belts.

When the third row seats are not required they fold down into the floor to provide a large flat load space (either together or split 60-40). When the second row seats are folded upright the cargo area is substantial, and with all seats in use there’s still plenty of room for a week’s groceries, golf clubs, or the family’s luggage.

The cabin of the new Carnival is more sophisticated and luxurious than before, featuring higher quality materials, along with premium features and technology.

Designers cite first class air travel as a key influence, with increased space, overhead consoles and tri-zone climate control. The two-tone interior features a higher proportion of soft-touch materials, which extends from the dashboard into the door trims, creating a premium ambience and consistent design throughout.

There are numerous storage compartments throughout the cabin of the new Carnival, including two glove boxes (one of which is chilled) and a large centre console big enough to hold a laptop. There are three USB ports and 12V electrical outlets throughout.

Among the technology features is a satellite navigation system on the Premium, plus multimedia entertainment systems on all models with a My Music feature for storing MP3 favourites.

The range of new safety technologies on Limited and Premium models include Blind-Spot Detection (BSD) with Lane Change Assist (LCA), alerting the driver to vehicles approaching from the rear at high speeds in neighboring lanes, and Rear Cross-Traffic Alert (RCTA), which warns against other cars driving behind the Carnival in carparks. The Premium model also offers Smart Cruise Control (SCC), which maintains a safe distance from the car in front, Lane Departure Warning System (LDWS), High Beam Assist (HBA), and Forward Collision Warning System (FCWS). A reversing camera is also standard across all Carnival models.

Kia says the use of high strength steel and new technology has resulted in a bodyshell that has 74% greater torsional rigidity than the previous model, for improved quality and safety. Together with greater sound deadening, road isolation technology and a much smoother body shape, this had led to a substantially quieter cabin.

Ride and handling characteristics have been fine-tuned for road conditions in this part of the world by Kia Motors engineers in Australia to ensure the most suitable package for local driving.