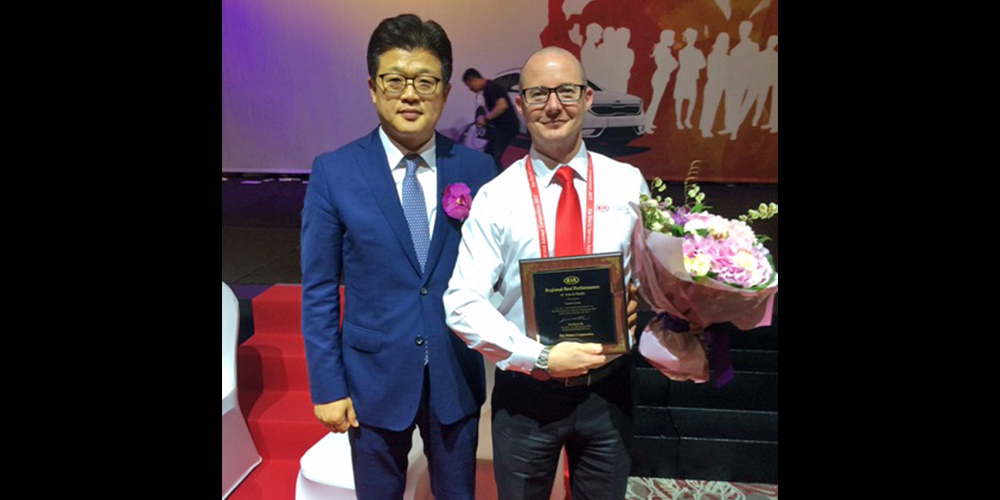 New Zealand’s Travis Cross has emerged as the top Service Advisor for the Asia/Pacific region in the 2017 Kia Skill World Cup competition in Korea.

After winning the New Zealand leg of the competition, Travis travelled to the Korean capital, Seoul, to take on the best from the rest of the world.

Travis, a senior Service Advisor with Botany Kia, beat out contestants from nine other countries in the region. He also finished in eleventh place out of 57 in the overall competition.

“I was surprised to finish first in the region and pretty happy with the result against the rest of the world,” says Travis.

The Kia Motors Skill Cup competition encourages Service Advisors to refine their skills in conjunction with maintaining Kia's ongoing commitment to customer satisfaction. To qualify, Service Advisors from Kia dealerships around New Zealand completed a 25-question written test, requiring comprehensive knowledge of the Kia product as well as aftersales policies and processes. Five then made the cut to compete in the national finals contest in Auckland, with Travis winning the opportunity to represent New Zealand.

The competition ramped up further at international level in Seoul, with a written test, video analysis test and a role-playing exercise among the challenges thrown at contestants.

Travis says the two day competition was intense and everyone was feeling the pressure of being in unfamiliar surroundings and having to compete against the clock. Luckily his experience at Botany Kia, where he has worked for three years, provided a good platform.

It was his first visit to Korea and while there Travis and the other contestants also visited one of the latest high-tech Kia Motors assembly plants, where more than 560,000 cars are produced every year.

“That was very impressive – we got to see Optima and Cerato being built,” he says.

Now back in his role at Botany Kia, Travis says the experience was amazing and he would love to take part again if the opportunity arose.

It is the second time in two years that a New Zealander has topped the region in a Kia Skill World Cup competition. Last year Giltrap North Shore’s Brian Cockerton took the regional honours in the Service Technician section of the contest.

“It’s a uncompromising test of individual knowledge and interpersonal skills of the Kia Service Advisor, and to reach the world finals, then come away as the best in the Asia/Pacific region, is a great achievement for Travis.

“Furthermore, the fact that two of our team have achieved this level of success for the second year running emphasizes the high standard of professionalism among the Kia Motors New Zealand dealerships.”