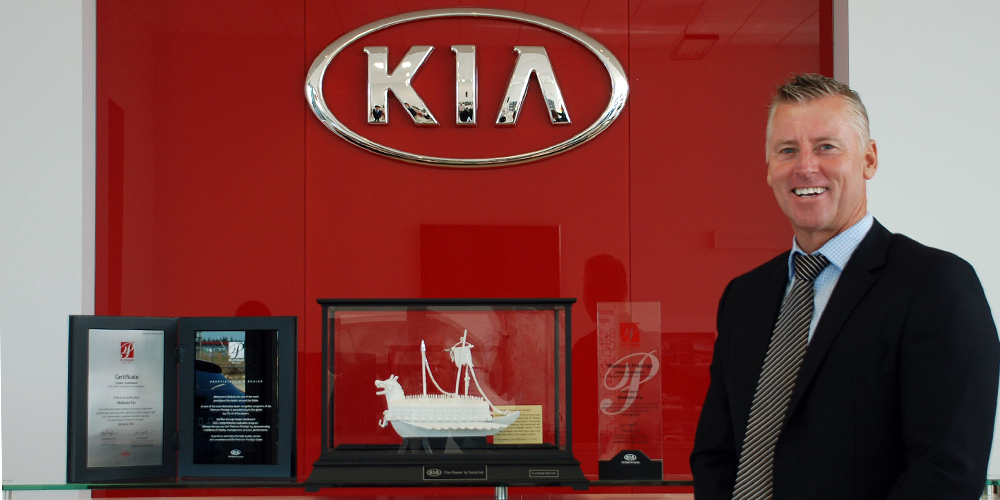 A dealer in New Zealand is celebrating after being elevated to an elite group within the worldwide Kia Motors network.

The team at Waikato Kia were “stunned” when told their efforts and sales results for the past year had earned them a place among the top 0.5% of all Kia dealerships internationally, winning a coveted Turtle Ship award - named after a historical 16th century Korean warship, and being the world’s first armored battleship. They also took out a Platinum award, which is presented to only the top 3% of Kia dealers around the world.

The awards are made to dealers who excel in customer relations, standard of facilities, management of their business, and both sales and service performance.

Receiving the solid silver Turtle Ship award and Platinum award from Kia Motors, Dealer Principal Mark Gothorp says the accolades “are a huge honor… and a gratifying reward for all the hard work our team has put in over the past year.

“We have been concentrating on moving into our new premises here in Te Rapa (north Hamilton) while making sure our customers received the same level of service during this process.

“We’re delighted to be included in such an elite group of Kia dealerships around the world. It’s a real tribute to the hard work of everyone in the Waikato Kia team and the way we focus on our customers.”

Waikato Kia moved to its new premises in the Te Rapa business park early last year, establishing itself as the largest exclusive Kia showroom in New Zealand and taking a leaf from the design DNA of Kia, with an ultra-modern style that stands out.

Mr Gothorp says the huge investment has paid off and the dealership is now more welcoming, with a lounge designed to be like an exclusive café where customers can relax with a barista-style coffee while completing a vehicle purchase or when their vehicle is being serviced.

Waikato Kia is a very people oriented business, says Mr Gothorp, expanding its staff to 13 since the new move in order to lift its level of customer support.

It is the second time in just over a year that a Kia Motors dealership in New Zealand has won a major international award.

“Mark and his team have performed exceptionally well in what has been a very challenging year in this market and absolutely deserve to be placed among the top 1% of Kia dealers internationally.

“The fact that two Kia dealerships in New Zealand have now been recognised among the world’s elite in the last couple of years, and a third dealer also rated very highly, speaks volumes for the quality of our people and our organisation,” says Mr McDonald.