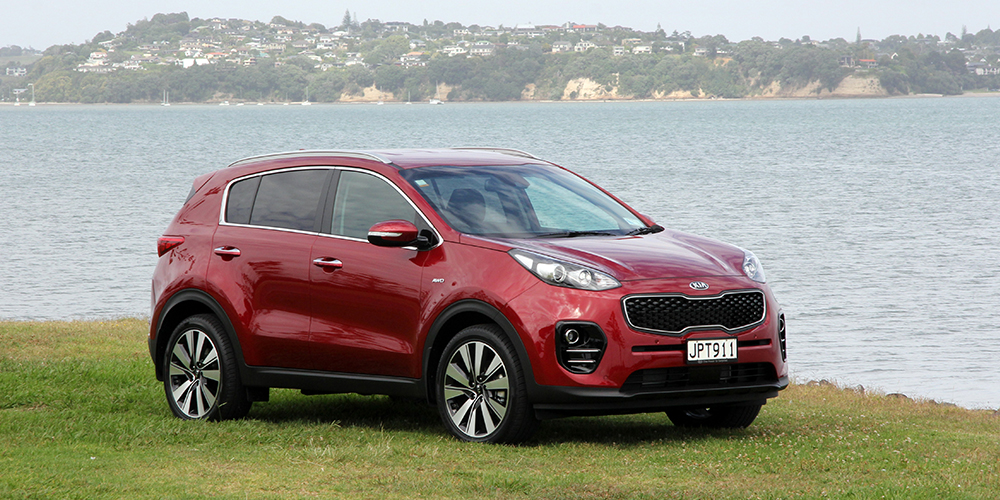 There’s no mistaking the all new Kia Sportage will attract attention on our roads.

Having just gone on sale in New Zealand, the confident styling of the Sportage already seems to be a winner with potential buyers, with pre-launch orders hitting record highs.

“The 2016 Sportage SUV is the most anticipated new model we have ever launched. Our dealers are seeing unprecedented interest from their customers and are placing a record number of orders,” says Todd McDonald, General Manager of Kia Motors New Zealand.

Sportage has been the top selling model for Kia New Zealand as the popularity of SUVs have taken off, thanks to a winning combination of award winning design, safety and performance. The Sportage has a great pedigree to call upon, since the original was credited with introducing the compact SUV category in 1996 and it has remained a leader ever since. Worldwide, Kia sold more than 1.6 million of the outgoing model between 2010 and 2015, an all-time high for any Sportage.

With the arrival of the fourth generation; Sportage continues to take the urban SUV concept to the next level with the newcomer already winning an ‘iF Design Award’ in Europe for design and innovation, just weeks into its international launch.

The 2016 model is bigger, more sophisticated and flaunts greater levels of comfort and technology, while maintaining a very competitive price.

Featuring a signature new look, the designers have created a sense of sporty and powerful energy from every angle to deliver a SUV that reflects modern trends.

The face of the new Sportage incorporates the biggest change to the vehicle’s exterior design over the outgoing model, with Kia’s hallmark ‘tiger-nose’ grille and headlamps separated to create a distinctive appearance from the front. The headlamps are positioned higher, sweeping back along the outer edges of the sharply defined bonnet. A lower, wider grille – enlarged for greater engine cooling – adds more volume to the lower half of the front of the Sportage.

The result, according to Mr McDonald, delivers a strong stance and commanding road presence.

The all new Sportage maintains its highly recognisable profile with a 30mm longer wheelbase (now 2,670mm), 40mm increase in overall vehicle length (to 4,480mm) and an improved aerodynamic rear spoiler, resulting in a more swept back shape that helps reduce drag to 0.33.

The increased dimensions of the newly developed chassis translate into greater interior space for the occupants and their luggage.

“Similar to the Sorento and Carnival models launched last year, one of the most important advances is in the styling and quality of the cabin,” says Mr McDonald.

The interior boasts high quality materials, with soft-touch surfaces and design integrity throughout to create an impressive ambience and everyday practicality, along with a range of technologies to improve comfort, convenience, connectivity and safety.

Leather is now standard on all but the LX model following a generous upgrade of equipment across the range.

“The specification on our new Sportage EX is much closer to the previous top spec model and the entry level LX, in my opinion, will stack up well against mid-range models on some of our competitors,” adds Mr McDonald.

A new GT Line model sits at the top of the Sportage range to give customers the option of exclusive features, including a D-shaped steering wheel with paddle shifters, distinctive two-tone leather, panoramic sunroof, quad LED fog lights, Bi-Xenon HID headlights and dual exhaust tailpipes. A first for any car in this segment, the GT Line has a new wireless charger for selected smartphone devices, as Kia looks to meet increasing demand for new technologies.

Both the GT Line and Limited also have satellite navigation, electronically adjustable driver and front passenger seats, and a smart hands-free power tailgate that activates automatically when the key fob is within proximity of the rear for three seconds or more.

The redesigned fully independent suspension and electric power steering has been further fine-tuned for this part of the world through the ANZAC handling programme to improve ride comfort, high-speed stability and handling response to match the significant enhancements in interior quality and Noise, Vibration and Harshness (NVH).

Safety plays an even bigger role in the Sportage – it’s always been highly rated – with the latest model achieving a Euro NCAP 5-star crash test rating. The 2016 Kia Sportage now has more than 51% of the bodyshell comprising advanced high strength steel, with torsional rigidity improving 39%.

New technology has also been employed to assist Sportage to avoid a crash in the first place with Blind Spot Detection, Lane Change Assist and Rear Cross Traffic Alert on all but the LX. Limited and GT Line models gain Autonomous Emergency Braking, Lane Departure Warning and Forward Collision Warning systems, as well as High Beam Assist, which detects approaching vehicles and automatically dims the headlights from high to low beam.

The new Kia Sportage offers three engine choices and all are improved to deliver better performance and efficiency. A 2.0-litre MPI petrol engine, producing 114kW of power and 192Nm of torque, features in the front-drive LX, EX and Limited models. A choice of either a 2.4-litre GDi petrol (135kW and 237Nm) or 2.0-litre common rail turbo-diesel (136kW and 400Nm) engines are offered with the latest update of Kia’s advanced Dynamax™ AWD system on EX, Limited and GT Line.