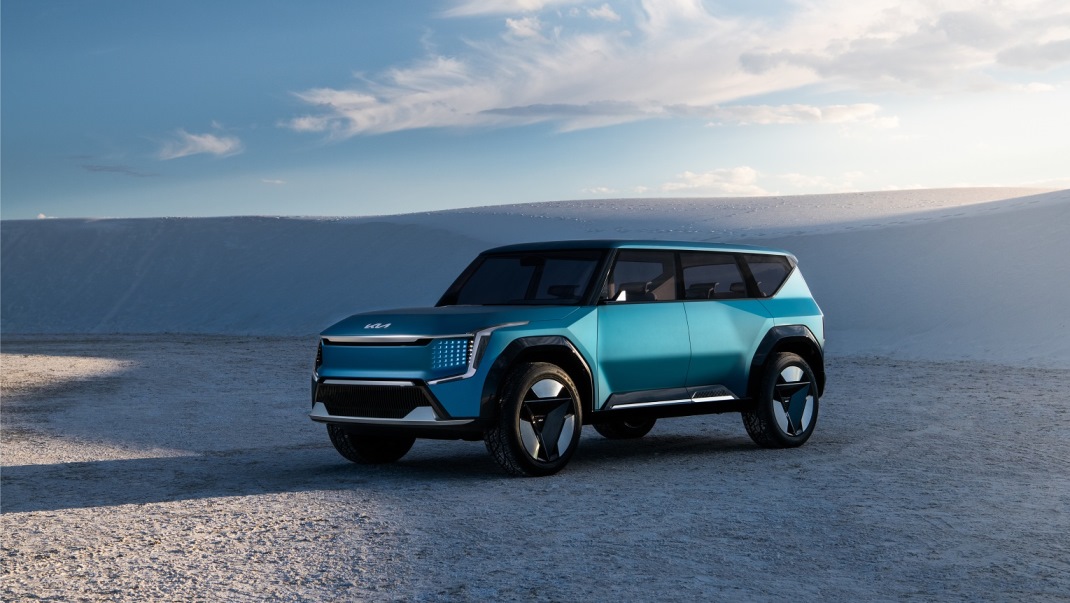 Having just launched the EV6 to great international acclaim, Kia Corporation has stunned onlookers at the AutoMobility LA with the reveal of its all-electric SUV concept, the Kia Concept EV9.

Seen as the clearest signal yet from Kia as to what might be the next addition to its new-generation EV lineup, the Concept EV9 epitomises the brand’s recent leadership in designing and developing desirable, high-tech, zero-emissions vehicles.

Just like the EV6, the Concept EV9 is known as a dedicated EV from Kia, having been carefully developed and optimised on the company’s advanced Electric Global Modular Platform (E-GMP).

Concept EV9 embodies Kia’s commitment to sustainable mobility solutions, having recently showcased the company’s future vision at the ‘Kia Sustainability Movement’ digital presentation. The design of the vehicle was inspired by nature and uses upcycled materials developed from waste deposited into the fragile marine ecosystem.

The Kia design team was especially influenced by the ‘Bold for Nature’ pillar of Opposites United. This has helped the all-electric SUV concept to take on an iconic and bold form, meshing logical and emotional qualities with playful, rugged features and styling cues.

Concept EV9’s extensive tech capabilities and all-round flexibility ensures that it feels at home when tackling traffic in densely populated urban areas; at the same time, it offers families the freedom to experience leisure pursuits away from city centers.

“The Kia Concept EV9 is yet another important marker for us in what has been an incredible journey since the start of the year. Having made our intentions clear – to become a global leader in sustainable mobility solutions – today we are proud to show the world our all-electric SUV concept, which fuses together an advanced zero-emissions powertrain, a cutting-edge exterior design and a contemporary and innovative tech-based interior space,” said Karim Habib, Senior Vice President and Head of Kia Global Design Center.

The shape of things to come

Concept EV9 represents a next possible iteration for the SUV. Developed on the advanced E-GMP architecture – the Concept EV9 is a high-tech, family-friendly vehicle that is powered by a zero-emissions all-electric powertrain.

It blends a stunning exterior profile with a modern and sleek interior space that is influenced with state-of-the-art tech. The incredible aesthetics of the Concept EV9 – both inside and out – have been carefully honed from Opposites United, Kia’s new design philosophy.

Taking inspiration from the ‘Bold for Nature’ design pillar of Opposites United, the Concept EV9 embodies an adventurous, outgoing and recreational form with its rugged and upright stance. From the outside, such proportions help outline a three-row SUV footprint, signifying a vehicle that is highly capable, practical and ready for action.

From the side, this modernistic angular profile gives the all-electric SUV a simple but distinctive outline that is deeply rooted in the ‘Bold for Nature’ pillar of Opposites United.

A low gravity side body creates maximum and instant impact with the sharp crystalline inspired fender volumes that sit high up on the vehicle. This low side body profiling effect makes the fender volumes of the Concept EV9 pop out, resulting in a strong SUV stance.

Contrasting with its muscular on-road presence, soft and welcoming volumes across the body of the Concept EV9 are offset with sharp and neatly edged elements. Solid rock geometry is expressed through a sophisticated design distribution of mass, while the volume of the soft fuselage cabin has been made to feel welcoming and approachable.

Concept EV9 measures 4,930mm in length, 2,055mm width, 1,790mm height and has a wheelbase of 3,100mm. The concept also combines its stunning SUV form with state-of-the-art engineering. The all-electric SUV delivers driving range of up to 300 miles or 480km. It also features next-generation ultra-fast charging technology with a 350-kW charger that allows its advanced battery electric powertrain to replenish energy from 10% to 80% in 20-30 minutes.

Kia’s iconic Tiger Face facade has been reinterpreted for the BEV era and is showcased on the Concept EV9.

The new Digital Tiger Face benefits from the fact that all-electric vehicles don’t need the traditional grille that ICE vehicles rely upon, resulting in the Concept EV9 having a full body coloured front that clearly conveys sustainability values.

The new BEV-focused grille houses an intricate star cloud pattern display that is completely hidden behind the body panel of the Concept EV9 when not in use. This stylish lightshow further highlights the high-tech nature of the all-electric SUV while still paying homage to the natural world. Sequential patterns create a ‘welcome light’ for the driver and also function to appropriately position lights during driving. The star cloud pattern inspired the Kia design team to create standout vertical Daytime Running Lamps (DRLs) for both the front and rear of the car, in-turn creating a unique signature look from start to finish.

The opportunities afforded with a re-styled grille and the Digital Tiger Face have resulted in a new air vent design that reduces the frontal mass of the vehicle and greatly improves aerodynamics.

The hood vent duct area is utilised as a solar panel that helps recuperate some of the electric energy that the Concept EV9 uses. This gives BEV owners an alternative source of energy when they are not close to a charging station.

Further enhancing aero efficiency are retractable roof rails that close inward into the roof of the Concept EV9 when not in use, creating smooth airflow over the vehicle. When needed, the roof rails can be raised by a simple touch of a button, further emphasising the all-action and all-go nature of the Concept EV9. A next-gen camera monitoring system that replaces the conventional wing mirrors further improves aerodynamic properties while also enhancing the spatial awareness of the driver. 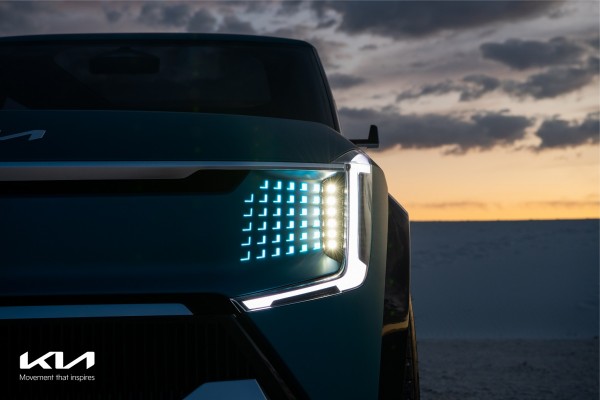 At the rear of the Concept EV9 is a compelling yet beatifically delicate triangular d-pillar treatment that acts as a visual focal point and resonates with the SUV’s angular design elements. The innovative d-pillar design also creates a unique Daylight Opening (DLO) signature.

The machined 22-inch wheels further add to the geometric appearance and robust nature of the Concept EV9. A triangular aero design piece controls the airflow around the wheel and creates a visual contrast to the circular nature of the wheel to fully express the Opposites United design philosophy, making sure a balance in harmony extends into every element and section.

To stay in tune with the environment – and tapping back into the ‘Bold for Nature’ design pillar – the Concept EV9 has an all-encompassing DLO panoramic sky roof. This not only offers passengers relaxing views from above but also opens the potential for positive impact on wellness and mood.

The beautifully sleek glass structure creates a direct connection to the outside environment, be that sunshine flooding into the cabin on a blue-sky day, the tranquil sound of rain during a weekend drive in autumn or the calming feel of the luminous glow of moonlight and the stars on a cloudless evening.

Against a wellbeing, wellness and mindfulness backdrop, the Concept EV9 has been carefully crafted to offer the driver and passengers a transformative interior space as the journey experience evolves.

Mirroring the exterior design, the interior of the Concept EV9 has also been greatly influenced by the ‘Bold for Nature’ design pillar of Opposites United.

Inside the all-electric SUV is a design undertaking that integrates the qualities of nature, movement and stillness as part of a scenic, first-class lounge. The panoramic roof, with its sky-gazing views, further adds to the sense of lightness and being in contact with the environment.

An interactive 27-inch ultra-wide display connects the Concept EV9 from the real-world to the virtual one, while serving as the nerve center for all driver and passenger requirements, including media, climate control and comfort functionality features.

This sense of ‘tomorrow’ extends from the visionary interior design and into the steering wheel. The automotive industry today treats the steering wheel like a separate product – a total standalone subsystem; the Concept EV9, however, takes a radically different approach in which the pop-up steering pad is an extension of – and integrated and harmonised within – the interior space.

Innovative interior modes when not moving

The interior of the Concept EV9 explores new perspectives as the journey experience evolves. The all-electric SUV has three forward-thinking interior modes that capture different journey situations and requirements.

Active Mode is when the Concept EV9 is on the move, making sure the driver and passengers have an optimal driving experience from within the all-electric SUV.

The two other modes relate to when the Concept EV9 is not moving.

Pause Mode modifies the interior space to be more akin to a first-class lounge, giving occupants the opportunity to directly interact with each other while benefiting from the light streaming in from the wide panoramic roof. In this mode, the seats switch around to enable occupants seated in the first-row and third-row to face each other. The second-row seats fold down and become a table, completing the first-class lounge arrangement.

The second stationary mode is Enjoy Mode, which opens the interior into a downtime breakout space by turning around the three-row seat configuration. In this mode, the tailgate opens, giving all occupants the opportunity to connect with the outside environment and gaze ahead and beyond the vehicle while sitting comfortable inside the all-electric SUV. 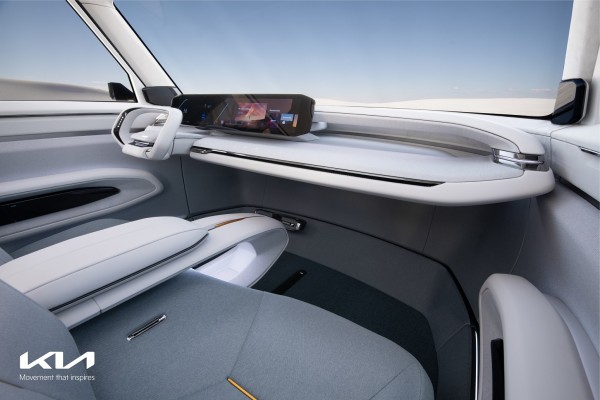 The Concept EV9 features a design inspired by taking note of the simplicity and perfection of nature, and how it contrasts and works together in perfect harmony. In this respect, the Concept EV9 took further inspiration from the ‘Water Element’ of Opposites United, taking on characteristics that relate to serenity, calmness and wellbeing. For example, the exterior colour mimics the expansive depth of the ocean; this is then balanced by a soothing and clear blue sky that radiates throughout the interior.

The ‘Water Element’ ethos also came to the fore when the Kia design team was looking at sustainable and ecological materials for use in the Concept EV9. Recycled fishnets have been used to help create the flooring of the vehicle and seating fabric is made from recycled plastic bottles and recycled wool fibers. Also, vegan leather, which is far more ethical and sustainable compared to conventional animal leather, was used throughout the interior space. Kia plans to gradually reduce the use of animal leather in all its vehicles.

Kia recently announced its corporate vision to become a “Sustainable Mobility Solutions Provider,” along with the intention to achieve carbon neutrality throughout the company’s value chain by 2045 at the ‘Kia Sustainability Movement’ event on November 11.

The strategy encompasses processes from logistics, vehicle production, vehicle use and the disposal of waste. The Concept EV9 embodies an important part of this strategy as the next possible addition to Kia’s high-tech BEV line-up.

There is currently a worldwide shortage of the key electronic components required in many parts of a new vehicle. Without these components (called “semi-conductors”) the assembly of a new vehicle can be delayed, or in some cases can be impossible. Kia NZ is working closely with Kia Corporation to optimise NZ Kia production however delays are currently being experienced for Kia NZ customers. Your Kia dealer can advise you of the expected lead time for your specific vehicle.

Kia NZ would also like to remind all new vehicle buyers (regardless of brand) that from the 1st April 2022 a rebate or a fee may apply to your new vehicle purchase as per the imminent NZ Govt Clean Car Standard. If you would like to contact us please click here. We would like to thank all of our customers for their support and patience during this time.