New Zealander Off To The 2016 Kia Skill World Cup 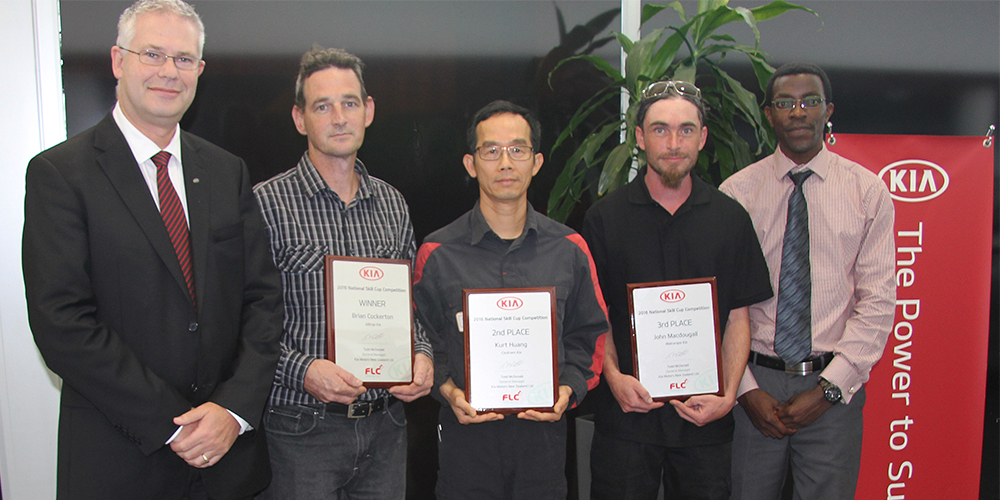 Auckland’s Brian Cockerton will represent New Zealand in the 2016 Kia Skill World Cup being held in the Korean capital of Seoul at the end of May.

Brian, a senior technician with Giltrap Kia in North Shore, will compete against the best Kia Motors technicians from around the world.

He triumphed in a two-day National Skill Cup Finals held at the Kia Motors New Zealand technical training centre to come away with the Gold Award and a trip to the Global Finals in Seoul. Kurt Huang from Cockram Kia in Christchurch received the Silver Award, and the Bronze Award went to John MacDougall, of Wairarapa Kia in Masterton.

Following the nationwide contest among technicians from Kia dealerships around New Zealand, the top three technicians qualified for the final round.

In the National Finals the three contestants faced a hands-on challenge, where they were tested on their ability to accurately execute Kia's diagnostic process covering three key areas – engine, chassis and electrical – and successfully repair vehicle faults within specified time limits. They also had to complete a written examination covering general knowledge of Kia products and systems.

All three contestants said it was a challenging event, especially having to complete the tasks against the clock.

National Service Manager Craig Buckley says, “It is designed to be a true test of the individual knowledge and skills of the Kia technicians, as well as challenging them to strive for excellence in all aspects related to vehicle maintenance, diagnosis, repair and customer service”.

Brian, who has been working with Kia Motors product for three years, was relieved to have won the National Final against two very skilled competitors and is now looking forward to preparing himself for the World Cup in Seoul in May 2016.